If I were one of those celebrity or political billionaires who toss around their money, I'd buy people DNA tests so they could trace their ancestry.

DNA results allow testers to understand some of their own behaviors and preferences and to feel pride in being part of a tribe. At least that's how DNA results make me feel.

DNA tests didn't exist at the turn of the 20th century, when a woman named Aggie Jones presided over one of the most popular locations in Lake City in north Florida. There, she was known as Aunt Aggie. Elderly African-Americans were often called aunt and uncle in the Old South. Not sure why.

Aggie was a former slave who was part Seminole and part African-American. She created a bone-garden landscape that made her famous. She collected and arranged animal bones in artistic, structured patterns that caused people to marvel. Shrubs, vines, and flowers grew in an among the bones. Aggie also grew vegetables and sold the produce. She gave away bouquets in hopes of receiving tips from visitors.

Tourists and locals apparently wandered the garden at will, relaxed in chairs Aggie had set up, and took photos of one another as one does at tourist attractions. Local youth borrowed or rented bones to use on Halloween. Aggie's bone yard was a topic of talk near and far.

Aggie was a fortune-teller and she also had a museum of sorts within her house. I had the impression people dropped by as they saw fit, not even trying to set up an appointment. It was like Aggie's house and garden existed for others to enjoy at will. She was always a gracious hostess. But did she have a choice?

I learned about Aggie and her garden in May Vinzant Perkins' 15-page book, Aunt Aggie's Bone Yard: A Historic Old Garden in Lake City, Florida. Perkins was a poet and gardener in Lake City. She appears to have written her book in 1952 but the material refers to the early 1900s. Aggie was in her 90s when she died in 1918.

You can read the entire book online via the link attached to the title. More information is available in a 2003 Orlando Sentinel newspaper interview with one of Aggie's descendants. The article is also available online: "Search for Family Roots Leads to Special Garden."

What made me start this post with a DNA comment was an article I read recently in a history/archaeology magazine that I have now misplaced, to my great annoyance. The article discussed archaeological finds in an ancient settlement in - to the best of my recollection - Nubia, which is the modern-day Sudan region.

Unearthed among other findings were animal bones aggregated in a way that reminded me of Aggie's collection of bones. They seemed to have been arranged in what might have been a structured pattern, as Aggie's were.

I wondered if Aggie were descended from the Nubians. And if so, if she retained a cultural consciousness about her heritage. I wondered if the voices of her ancestors stayed with her in some way. Or if homeland traditions were handed down orally, from elder to child. And I wondered if she also learned traditions associated with her Seminole heritage.

I have no answers, just a vivid imagination. But I'd like to think the answers are yes. Such self-knowledge would have given Aggie agency, dignity, and identity. Those strengths were normally hard to come by for a former slave at that time and place.

Today, a DNA test could trace the threads between Aggie and her heritage. She didn't have that option. But even long before such validation was possible, Aggie was strong enough to carve out a distinct identity. And it was very much at variance with the cultural norms that surrounded her. She and her story deserve to be remembered.

POSTSCRIPT: On a side note, I'd like to share this photo of a beautiful quilt of Aggie, created by artist Teddy Pruitt. Click on the photo to be taken to the artist's website, which shows a larger image. 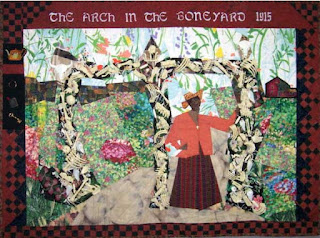