Flames lit more than a fire

One hundred and thirty years ago this month - Sept. 27 to be exact - the new city of DeLand suffered a fire that scarred a two-block section of downtown. Afterwards, city leaders ruled that new business buildings had to be constructed of brick or stone. Thanks to that long-ago ruling, DeLand today has a nationally recognized historic downtown.

But this blog post is about the human drama of the fire, as recorded 90 years afterward in the 1976 Reflections, West Volusia County, 100 Years of Progress.

For context, consider that the city fire department organized in 1885 consisted of horse-drawn "chemical engines" - a pumper and a hook-and-ladder wagon. Both were hand-operated. The town was proud of its department. Volunteer firemen marched, in uniform, in the 1885 Independence Day parade.

But the equipment was overwhelmed by the fierce fire that started in downtown's Wilcox Saloon at about 1 a.m. on Sept. 27, 1886. The chroniclers of Reflections say that:


Late at night, the fire literally exploded through the heart pine of the buildings. Soon guns were firing, dishpans beat and everybody yelling.

Imagine waking up to such an emergency. The fire lasted about two hours, and leveled 22 buildings in the business district between New York and Rich avenues. An estimated 33 stores were lost. Heroic efforts on townspeople's parts prevented even more destruction. Again, from Reflections:


The Carrolton Hotel at the southeast corner of New York and the Boulevard was saved by hanging blankets toward the fire and pouring water from a roof tank and the bucket brigade over them. Fishers Drug store on the southwest corner was about to burst into flame from the fierce heat of the Miller and Tanner livery stable and feed store on the northwest corner. Somebody thought of the carbonated water for the soda fountain. By spraying it from windows, the building was saved.

Local lore says that, by the time townspeople used the carbonated water, all other water resources had been exhausted. By the time daylight dawned, likely everyone in town was exhausted. But DeLand bounced back, stronger than before.

Still, 130 years later, some peripheral questions linger for me. Reflections includes a photo of the city's first fire brigade and notes that the volunteer firemen wore leftover Confederate Army uniforms. The city was settled by a mix of Northern, Midwestern, and Southern people, and I can't imagine Union Army veterans donning rebel garb. The war was only 20 years in the past for them. And how would such apparel make the area's former slaves and their descendants feel? Perhaps I'm guilty of assessing from a 21st century perspective. The 19th century minds struggling to build a new city may have operated from a sense of frugality. People back then likely wouldn't have wanted to waste functional clothing.

My other questions revolve around the people lugging buckets of water that terrible night of the fire. Did everyone help? Women and children as well as men? Did people with no stake in any downtown business rush in to help? What happened right after the fire?

That last question, at least, does have an answer. Unpleasant though it is.

In echoes of today's racial struggles and misunderstandings, the story of what happened after the fire is disheartening. The shocked populace turned fearful. They worried that people they termed the neighborhood's "disorderly negroes" would raid the destroyed town. The fear was unwarranted. Nothing happened.

Helen Parce DeLand - daughter of town founder Henry DeLand - wrote a 1928 city history that includes a section about the fire and its immediate aftermath. In The Story of DeLand and Lake Helen, Florida, she writes:


"... for several days folks went armed in fear of disorder. These fears may have been groundless but all were obsessed by them."

Residents called on local cattlemen, who rode in to serve as patrols. Or, as Helen Parce DeLand writes:


"In their desperation they called on the cowmen from the woods and they quickly came galloping in with rifles unslung, looking for negroes to shoot at. Of course the negroes did not appear."

It sounds like a bad Western. Apparently tensions subsided, and the work of rebuilding commenced. But Parce's appendix - which is omitted from most versions of local history - reminds me how much narratives of the past are partial portraits that reflect the people doing the telling.

So what should we see when we peer back to September 1886? Heroic settlers united against a raging fire? Cracker cowboys looking for a fight? The voiceless African-American community whose history we don't have? Class, racial, regional tensions? Perhaps all of it. Like today.

A mission to educate 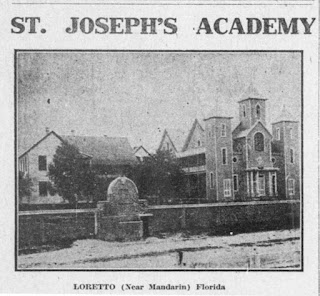 I saw this photo of a Catholic academy while browsing vintage Florida newspapers online, and was immediately intrigued. First, I was surprised, because the photo was part of a large ad telling of the virtues of the academy. Then my questions arose. Where was Loretto? What happened to the school? Why had I never heard of either?

Little did I expect that research would reveal a fascinating thread of Florida Catholic history.

Started as an educational initiative soon after the Civil War, the academy had evolved into a boarding school for boys by the time the ad was placed in the 1890s.  As the photo states, the school was situated in what was then the town of Loretto. The community was later swallowed by the giant city of Jacksonville, but it retains its named distinction today and is considered a neighborhood.

Loretto is adjacent to the historically significant Mandarin, now also a neighborhood. In fact, the other photo on this page is from an article that locates the St. Joseph's Church and school as being in Mandarin itself. This second photo is from a 1914 encyclopedic publication with the unwieldy title of The Catholic Church in the United States of America,Undertaken to Celebrate the Golden Jubilee of His Holiness, Pope Pius X. At the time, the mission of Mandarin was considered 13 miles south of Jacksonville. More interesting, the mission was first visited by a priest from St. Augustine in 1787. Florida wasn't yet Florida at that time. The land was under Spanish rule. 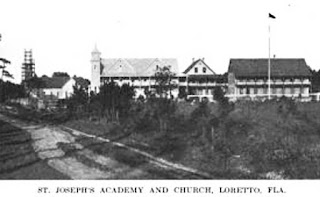 The first church - I guess the first St. Jospeh's - was built in 1858, very early by Florida frontier standards. By that time, Florida was a U.S. state and the Mandarin Mission had suffered from pressure and resistance from non-Catholics. The congregation of St. Joseph's was smaller than it had been more than a half-century earlier. Fr. John Chambon's 1863 census reported 120 Catholics. In comparison, from 140 to 150 baptisms alone were performed during the six-year period between 1787 and 1793.

Fr. Chambon is considered the founder of the mission, but a Fr. de la Fosse of St. Augustine is credited with starting the school in 1868 with Sister Mary Julia and Sister Mary Bernard of the Sisters of St. Joseph, also of St. Augustine, according to the Golden Jubilee book. A full history of the still-vibrant St. Joseph's Church is featured on the parish website and it tells how Sisters Julia and Bernard traveled 27 miles by oxcart to start teaching. They lived a mile from the school and once got lost in the thick undergrowth and wandered around until late into the night.

The academy grew into a boarding school after the sisters started taking in boarders to help offset costs. It grew in stature, too, according to the parish history, and had students from as far away as Cuba. The sisters also taught free day school for boys and girls. Because of segregation laws, the sisters had to teach the African-American students in a separate building.

The academy lasted just shy of a century. It closed in 1963, after a remarkable run. The associated church remains a vibrant parish, and its online history is well worth reading. Not only does it provide an overview, it includes details that help convey the challenges faced by Catholics who served in Florida when it was mission territory. I salute them.
Posted by Gerri Bauer at 11:46 PM No comments: