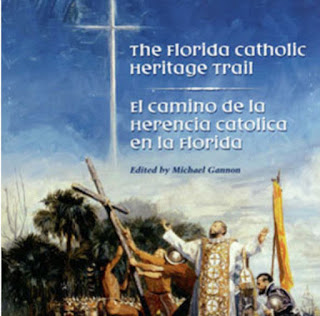 I'm stepping back a few decades earlier than usual in this post. That's so I can share information about how Florida property was stolen from the Catholic church.
We hear a lot about how land was taken from other groups during the formative years of our country. I'm going to guess you've never heard about this particular land grab.

The time period in focus in this post is the early 1820s. That's when Florida was removed from Spanish control and put under the umbrella of the United States. Florida wasn't yet a state. It became a U.S. territory in 1821.

Rather than listen to me, read the direct explanation from The Florida Catholic Heritage Trail. The detailed Trail document from the Florida Catholic Conference was published in 2005. It was edited by now-deceased author and scholar Michael Gannon. Here's what the document says about the seizure:

"With the change of flags in East Florida in 1821, the parish of St. Augustine suffered substantial loss. Claiming that they were the property of Spain, not of the church, U.S. federal officials seized the church building, burial ground, episcopal residence (statehouse in British times), the former Franciscan convent, and Nombre de Dios."

Nice, huh? I'm sure church authorities differed about that perception of ownership. The U.S. government didn't care. Its agents saw a chance to grab prime real estate and thwart a "foreign" religion.

The bishop in Charleston at the time, Bishop John England, managed to wrestle the church and cemetery out of U.S. hands. Or, as the Trail document says, he "secured their return" to the church in 1823. This wasn't just any old church building. It was the church we know today as the Cathedral Basilica of St. Augustine, the first and oldest Catholic parish in the United States.

The bishop had to be content with the return of those two properties. The episcopal residence building and land were given to Protestants. The Episcopal Church built Trinity Church on the site in 1831.

The St. Francis Barracks - the convent where friars once prayed - was no longer a sacred space even in 1821. So I concede the site appeared rather secular to incoming U.S. authorities.

The Franciscan friars had left during the 20-year British occupation of Florida in the late 1700s. The British confiscated and converted the barracks to military quarters. Spain continued the usage. The U.S. followed suit. The property went on to house Confederate and then Union troops. By then, Florida was a state and embroiled in the Civil War. The renovated property may be familiar to you today as headquarters of the Florida National Guard.

As for the important and historic Mission Nombre de Dios, at least some of the site found its way back into the fold of the church. But I don't know how big the original site was, how much was returned, or when. All I know is that the beautiful waterfront mission is definitely part of the Diocese of St. Augustine.

The secular authorities tried, but they couldn't wipe out the faith's presence or influence. Millions visit the Cathedral and Mission Nombre de Dios every year. The faithful go to pray, others visit for historic or cultural reasons. God's presence is palpable to me at both places. May others also feel his peace.