Of haw jelly and cassava pancakes

****Recipes in this blog post are for historical interest only.****

Now that the disclaimer is out of the way, I can focus on a small treasure of a cookbook, a bicentennial edition published in 1968. Yes, eight years earlier than the 1976 Bicentennial the rest of us remember. But for New Smyrna (Beach), 1968 was indeed a bicentennial year. The coastal city was settled in 1768 in what is believed to have been the largest British colonization attempt in the then-New World.

You can access Smyrna colony textual documents at the University of North Florida's Florida History Online, and I highly recommend a stop at the New Smyrna Museum of History next time you're in the area. It's run by the Southeast Volusia Historical Society, which in 1995 issued a reprint of the 1968 Keepsake Recipes of New Smyrna, Bicentennial Edition. The cookbook is the focus of this blog post soon as I stop rambling about New Smyrna Beach. I lived there for seven years, and have a soft spot for it. 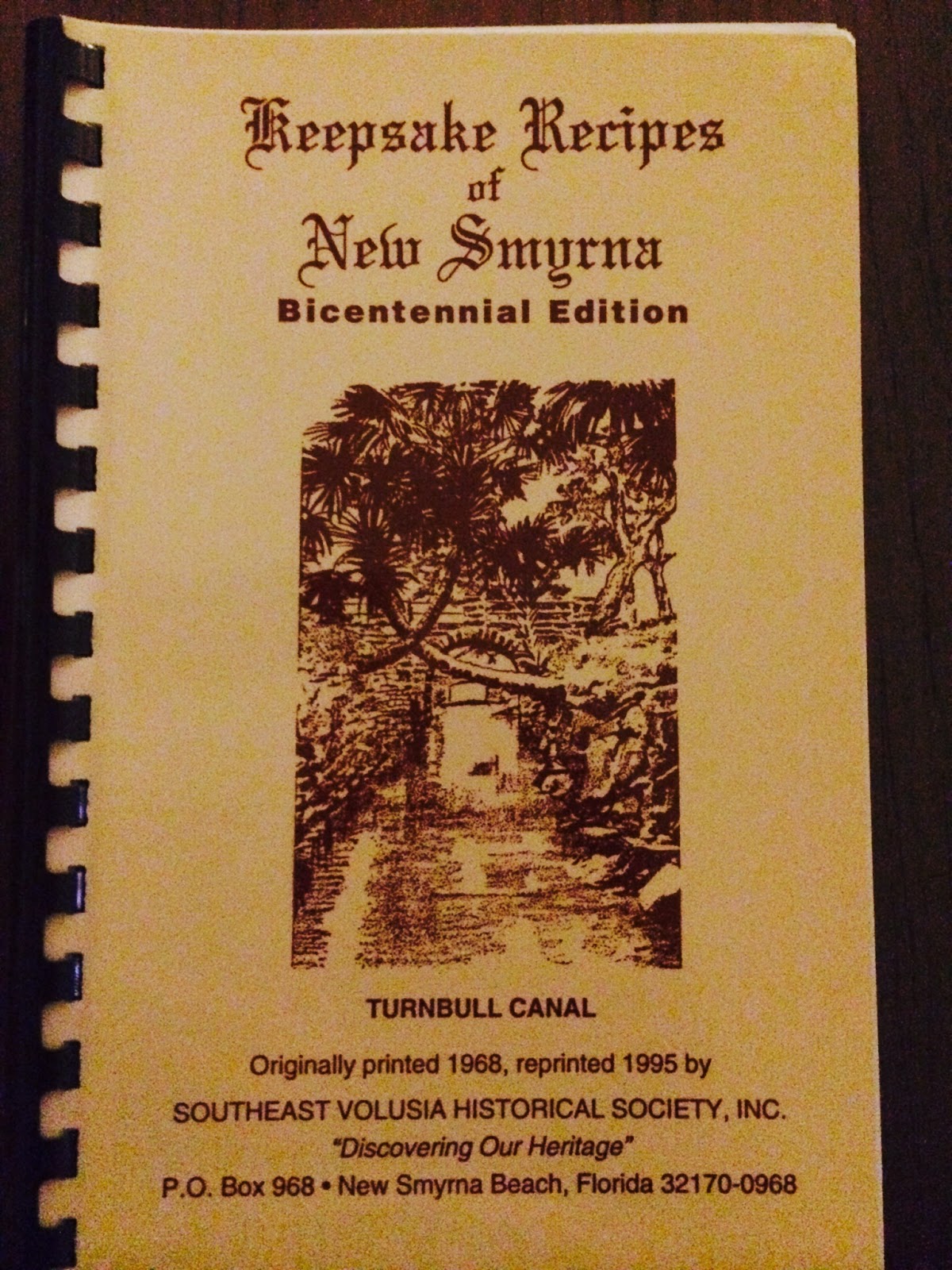 The New Smyrna Junior Woman's Club published the original edition of the book. Many residents who contributed recipes had local roots far back into the 19th century. The women shared a number of pioneer culinary treats, including the haw jelly and cassava pancakes of this post's title. Eileen H. Butts contributed both those recipes, and she has this to say about the pancakes: "A most wonderfully different taste delight." Hmmm. Maybe, but after reading the recipe I'm not so sure I'd be willing to try them out:

Grate the fresh cassava root. Soak for a couple of hours in salted water. Squeeze out water. Stir grated pulp in any good pancake batter.

However, they do sound a tad more appealing than the Golden Cattail Pancakes recipe, which calls for a cup of cattail pollen.

The haw jelly sounds delicious, and Eileen notes that, "There is no jelly in all the world more beautiful - a lovely rose color and nothing else has the delicate haw flavor." Berries of the Florida native hawthorn are hard to come by, and people who know where haws are growing tend to keep mighty quiet about it. I've traipsed around a lot of Florida and  have yet to encounter the plants. Consider yourself lucky if you come across some "summer haws," the kind transformed into the jewel-tone jelly of the recipe.

After the work of finding the main ingredient, the rest of the recipe is equally demanding. It calls for the cook to wash the haws, "pick over carefully" and then boil them until they burst. The hot pulp is placed into a jelly bag and set aside until all the juice has dripped out. Only then does the cook proceed with typical jelly-making steps of boiling the mixture with sugar until the jell stage is reached.

Finally, there's a note that if haws are in scant supply, a "very few" green apples may be added at the juice-making stage.

After all that, a recipe for Orange Leaf Tea is a breeze.  Contributer Mary Elizabeth (Mrs. Walter M.) Pace instructs the cook to first search for tender young leaves of an orange tree. Then, "bring water to a slow boil, add leaves, cooking slowly several minutes." And that's it. Done. Sweeten to taste if you wish.

Essentials of living often served double and triple duty in pioneer homesteads, and Orange Leaf Tea fits in that category. Mrs. Pace ends her tea recipe by advising: "Good for breaking fever and bring out the measles." I may try the tea for its taste - it does sound yummy - but on matters of ill health I'll defer to modern medicine. With a dose of tea for good measure.
Posted by Gerri Bauer at 10:19 PM