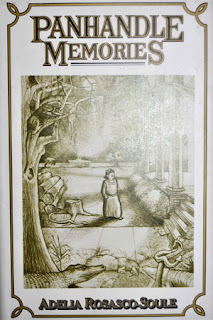 I jumped to read the 1987 memoir, Panhandle Memories, by poet Adelia Rosasco-Soule. Frontier memoirs are a favorite, and this one was about a pioneer Catholic family.

There aren't as many references about Catholicism as I expected. I wondered why, because Catholicism shapes one's whole being. Adelia and her family were minorities: Italian immigrants, Catholic, and members of the region's 1 percent. The mix was certainly unusual. Perhaps Adelia focused only on the big picture in her writing, even when elderly and the Poet of the Panhandle. She was named the first Poet Laureate of the West Florida Panhandle in 1986. Also, the book is a compilation from the poet's writings, not a straight memoir. It was edited and published by the West Florida Literary Federation and the Pensacola Press Club.

The memoir is shaped as though written alternately by Adelia and the family's mixed-race housekeeper "Aunt Mariah" Cosey. Adelia was 3 when her family moved from Genoa, Italy, to Bay Point, outside Milton, in 1904. They lived in the waterfront "Big House" and her father was president of the sawmill and a bank. The family also conducted a shipping business.

Tidbits of Catholic history I gleaned are (with page numbers in parentheses):
What does this all tell me?  That we've all been immigrants at one time or another, either in recent generations or in the distant past. At some point in every family's life - even our Native Americans, for they, too traveled here from elsewhere - a generation has been alone in an unfamiliar place. Gradually, each found a way to make the old and new fit together. May we continue to do so today, without animosity, and with love.
My gratitude to Volusia County Library System for having this book.