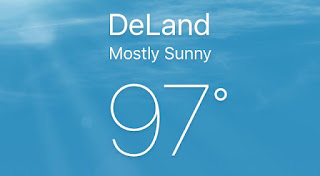 Florida summers must have been brutal for pioneers. I think about that when the temperature zooms into the high 90s as it did last week. Did newcomers know ahead of time what they'd face in a Florida July and August? Probably not. Advertising of the era used words like salubrious to extoll the climate.

Yet, I can't assess the matter as though my 21st century self were plopped back into the 1880s. More than one resource relates how 19th century folks were a bit hardier than their modern counterparts when it came to weather. In the North, chilly interior rooms were the norm in winter. Conversely, extreme warmth was just a part of life in the South. People adjusted their lifestyles the way I adjust a thermostat.

Floridians and others today pay homage to Apalachicola's Dr. John Gorrie, the father of air-conditioning. But more than a century would pass before his invention evolved into the familiar air-cooling systems standard in Florida houses. In the late 19th and early 20th century, even an electric fan was a status symbol in Florida. Partly, I think, because having electricity was itself a sign of wealth and stature.
Pioneers who populate my fiction didn't have electricity in the early years of settlement-building. That's because real-life settlers didn't. So what did they do when the thermostat read 97 degrees F. or higher? They:
I'd have a hard time giving up air conditioning. But slowing down is something I can appreciate. And sometimes try to do.