South Miami a city within a city

Life continues to affect my blogging frequency. I'll probably be on this once-a-month schedule through the end of the year. Hope to get back up to twice a month in 2018.

But I digress. Back to Florida history. We all know about Miami, and hear a lot about Miami proper and South Beach. But South Miami, not so much.  I didn't even realize there was a separate city named South Miami. So when I saw this video while browsing on YouTube, I was definitely interested. A Florida city I'd never heard of! Even though I've likely driven through it on one of the few trips my husband and I have made to Miami.

South Miami's motto is "The City of Pleasant Living." The city has about 10,000 residents and is  near Coral Gables. That, too, is a separate city. But Coral Gables has a fairly visible profile and independent identity. To me, that's partly because I associate it with Coral Castle, an attraction that actually isn't in Coral Gables. It isn't even in Miami proper. But that's another blog post.

Wikipedia reports that South Miami residents incorporated in the 1920s in hopes of staving off the "booming city" just north of them. Miami swallowed it anyway, by growing around it in influence and name recognition, if not in actual city borders.

As a municipality, South Miami went through some rough times. The city started off at 6 miles in size, but reduced its borders twice and now is about 2 miles in size. Border shrinkage wasn't the only issue. Read the history on the city's website to learn how South Miami was "saved by a fire engine with no flames in sight!"

Now that I've been introduced to South Miami, I wonder how many other cities are nestled within the metropolis I consider one giant city of Miami. More fodder for future blog posts, I'm sure. 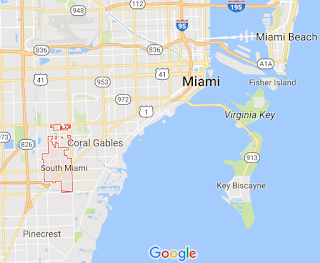