How's this for dedication?

Today's post grows from a photo caption. I just got back from a family mini-trip in Vero Beach. One night, we ate at the Ocean Grille and I found a copy of  Images of America - Vero Beach in the gift shop. If you're into history, chances are you're familiar with the Images series by Arcadia Publishing. I love the photo books because they provide such great slices of local history. The Vero edition is by Teresa Lee Rushworth and, like the others I've read over the years, is a great time capsule.

My point in bringing up the book here, in a Pioneer Catholics blog post, is because of this photo from page 16. It is the first St. Helen Church in Vero Beach. The caption explains that the wooden church was built in 1919 after the congregation raised enough money. Apparently, there was one priest available to say Mass at the new church. Vero was not his only parish. The book says a lone priest was assigned to tend souls from Rockledge to Okeechobee. Google tells me that's about 100 miles. 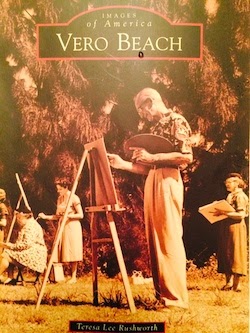 That's one example of dedication. The other is found among the parish members who resided in the Vero area, which was still a frontier in 1919. (I see, once again, that I'm going to have to expand the parameters of my blog beyond the 19th century because so much of Florida's pioneer days stretched into the early 20th century.) Before they scraped up enough money to build their tiny church, the Catholics in Vero had to make an effort to attend Mass. Teresa Lee Rushworth explains in the photo caption: "Prior to 1919, Vero's Catholic residents had catch a 6:00 a.m. train every Sunday morning in order to attend the 8:00 a.m. Mass in Fort Pierce."

Train travel wasn't exactly luxurious in 1919 Florida. Those pioneers rode the rails two hours there, and two hours back, for a service that was probably an hour or hour-and-a-half. That's how important the spiritual sustenance of the Mass and Eucharist were for those long-ago Catholics. It's something to think about, the next time the short, air-conditioned ride to church seems like a burden. How important is spiritual sustenance to you?