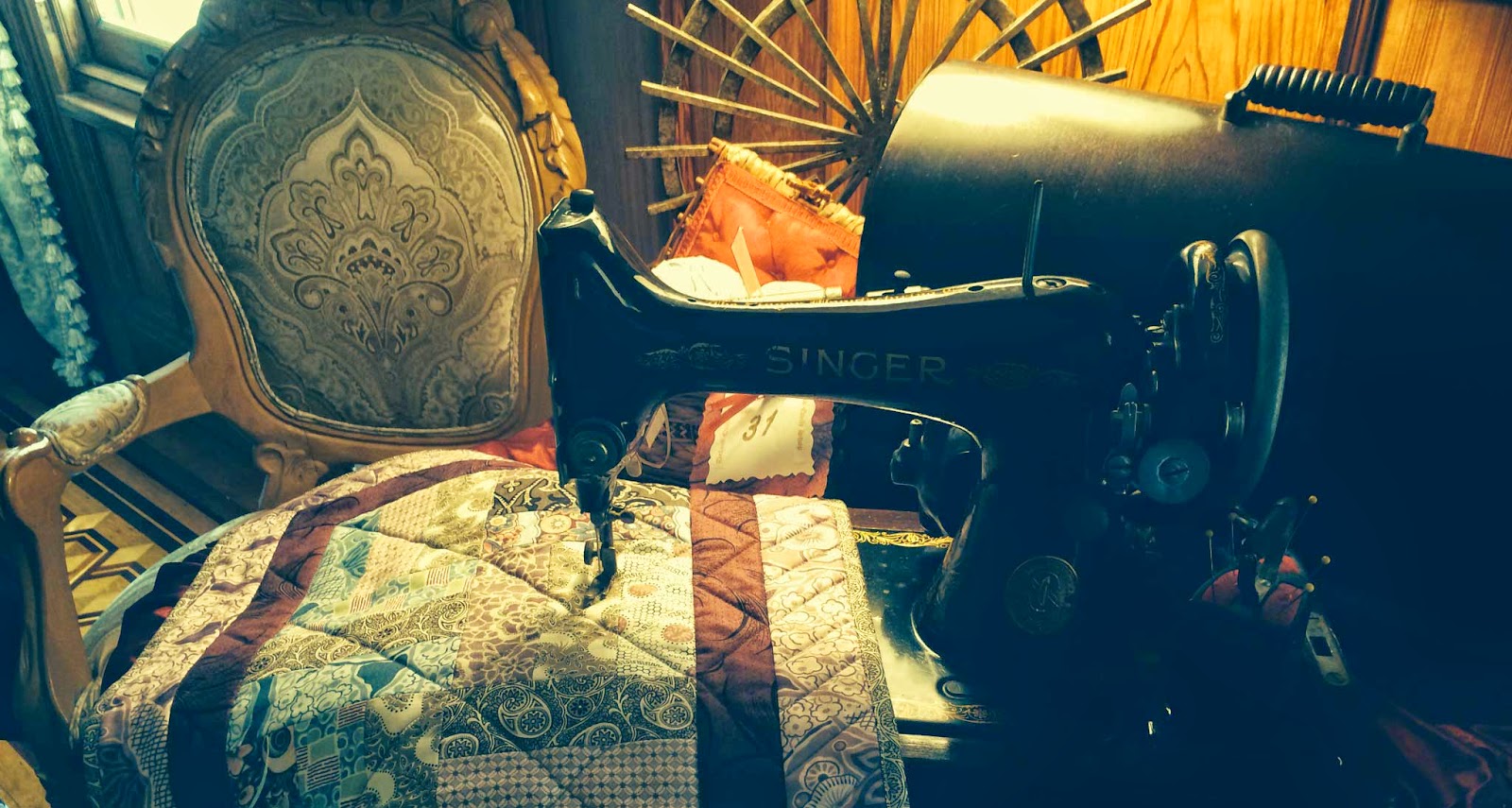 How perfect is this? I sat down to write this post about the historic Stetson Mansion and the Quilt Showcase featured there. A new-old Antiques Roadshow episode from 1998 was on TV. As I started typing, the appraiser on TV displayed an 1880s "Boss of the Plains" Stetson made while hatmaker John B. Stetson was still alive. The new aspect of the episode was a comparison of then-and-now values of the featured antiques. The Stetson hat was worth $600 to $1,000 in 1998, and $800 to $1,200 in 2014. But can you really put a price on history?

That's a segue for me to say the Stetson Mansion is priceless. I'm sure the owners differ on that. What is priceless is the combination of quilts and the house built by John B. Stetson in 1886 as a winter home in DeLand. And that's for a major reason (besides the obvious) you might never expect. I certainly didn't. The detailed patterns of the wood flooring mimic quilt designs of centuries gone by. That's amazing, particularly because the mansion's floors are artistic gems. Apparently Stetson's wife, Elizabeth, enjoyed quilting.

The Stetson Mansion Quilt Showcase and Tour drew me back to the house for my most recent tour. Vintage and contemporary quilts became featured accents throughout the 9,000-square-foot structure, with some quilts made with material from the Downton Abbey fabric line. Not that the house needs accessories. Stetson Mansion is one of a kind, and you must visit if you like historic homes - and even if you don't, just to see how a National Register building can retain its architectural integrity while functioning as a 21st century private residence and a tourist destination. You'll be in awe of the house's bright, airy feeling, the layout, woodwork, floors, stairs, furnishings, decor, and of the restoration done by owners Michael Solari and JT Thompson. I've now been lucky enough to have been on tours led by each of them.

The portrait of 1880s life that emerges on tours is obviously one of luxury. Stetson was a wealthy man. He donated so generously to the local university it was renamed John B. Stetson University in his honor in the late 1880s and today is known as Stetson University. (Disclaimer: I work there.) Stetson's winter estate was originally 300 acres and is now a more manageable 2+ acres. The distinctive house has details such as thousands of panes of leaded glass, different wood-floor patterns in each room, stained-glass, and designs carved into the woodwork. Stetson's friend and fellow Florida winter resident Thomas Edison installed electricity, a rarity at the time. The Stetsons entertained royalty and robber barons alike during their winters in residence.

It's hard enough to envision Edison hanging out in pioneer DeLand, much less Vanderbilts, Astors, and King Edward VII and his entourage. How I wish that a Stetson servant had left behind a diary! Many servants lived in the mansion, on the third floor. The first-floor kitchen had a call system similar to the one in Downton Abbey. The servants were able to tell which room was ringing for service. Which is one reason why, I'm sure, there is no diary. What servant would have had time or energy to write after a day of cleaning, cooking and serving the owners and their guests? Still, it's nice to dream that somewhere, sometime, written recollections will turn up. Imagine what we would learn.